The Action at Wilson’s Wharf was initiated at noon on May 24th, 1864, with a Confederate mounted cavalry charge on USCT pickets in the forest and swamp surrounding the fort.

Note: The following information is primarily sourced from a paper written by Edwin Besch and the article “Valor at Wilson’s Wharf“. 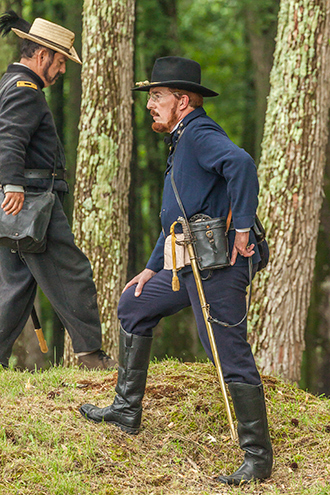 Approximately 40% of the Army of the James was made up of black soldiers. The forces garrisoned within Fort Pocahontas were the 3rd Division led by Brigadier General Edward W. Hinks as well as about 1,100 men from Brigadier General Wild’s brigade, consisting of the 1st, 10th, 22nd, and 37th U.S. Colored Infantry. Attached to Wild’s brigade was also Battery B of the 2nd U.S. Colored Light Artillery. Further artillery support came from Lieutenant Nicholas Hansen’s two 10-pounder rifled Parrott guns from Battery M of the 3rd New York Light Artillery and 2nd Lieutenant Julius M. Swain’s signal detachment. Navy gunboats USS Dawn, under Navy Acting Lieutenant J. W. Simmons, and USS Young America completed the defensive force. The significance of the post’s location near Jamestown, where the first slave shipments arrived in 1619, was not lost on the USCT, a number of whom had been previously enslaved in the surrounding region. 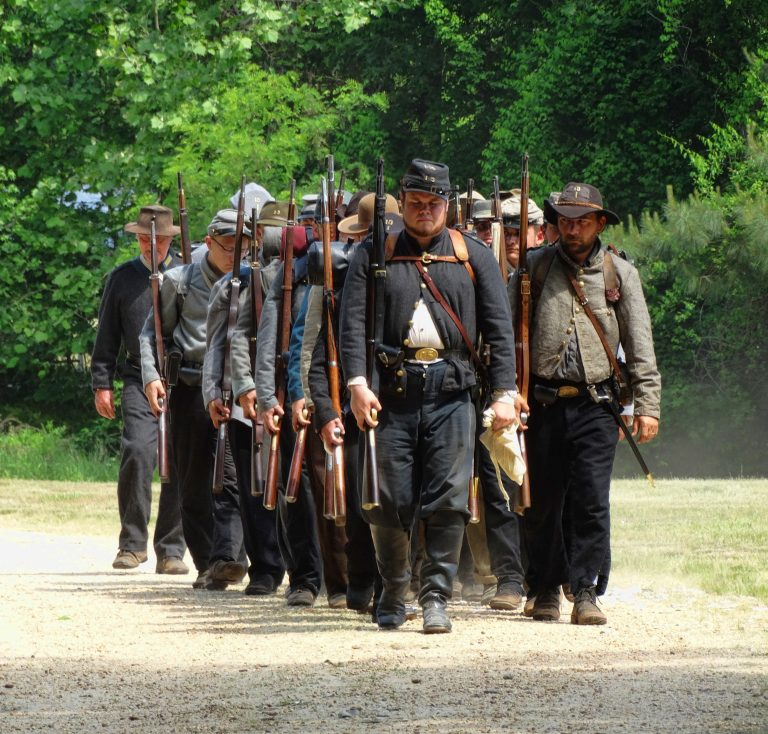 The Confederate advance arrived early the morning of May 24th after an overnight ride from Atlee’s Station northeast of Richmond. The General reconnoitered the fort, determining its strength. The entrenchments were only about 1/3 completed, and Lee believed his numerically superior forces could capture the African brigade or at least force it to abandon the fort. Defeat by the black Federals would humiliate him.

The Action began about noon with a mounted Confederate charge on pickets posted some distance in front of the fort. Companies of the 1st Regiment USCT checked the Confederates, but some soldiers were cut off and captured. Following the attack on Union pickets, Lee marched his cavalry to the edge of the woods and ordered them to dismount. He deployed Wickham’s left wing, Dunovant’s right wing, Lomax’s bridgade, and the 5th South Carolina in a line of skirmishers and advanced on the Federal works. The Confederate battle cry rang out at 12:30pm.

Lee’s hope was to cut off all communication with the gun boats that could offer assistance to the Federal forces. Within the fort, Wild ordered his men to hold their fire until the enemy forces were within easy range. The Confederate lines became ensnared in the abatis, at which point the order to fire was given by Wild. Fighting ensued for 90 minutes before the Confederates, finding the defenses too strong, retreated.

Lee sent a surrender demand under a flag of truce. The terms Lee outlined were should the fort be relinquished, the black captives would be delivered to Richmond as prisoners of war. If they refused, he would take no responsibility for them when he took the fort. The threat was an obvious reference to the massacre at Fort Pillow six weeks earlier, when captured USCT were executed. Angered by Lee’s arrogance, Wild replied “Present my compliments to General Fitz Lee and tell him to go to hell.” 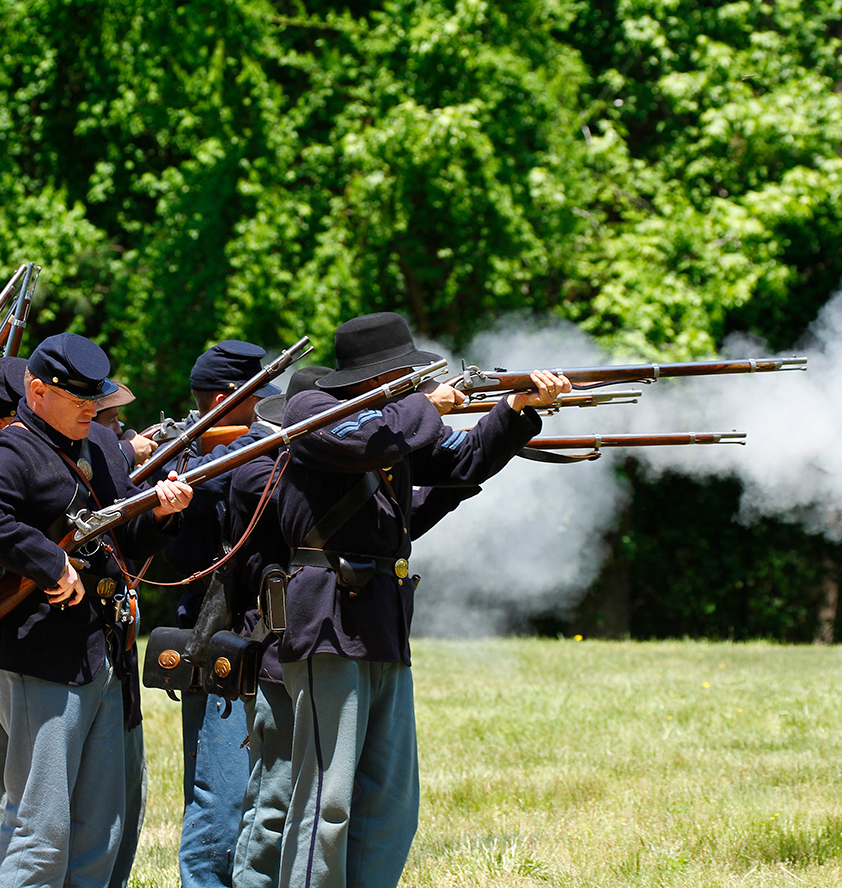 Goaded by Wild’s reply, Lee resumed his attack at 2:30, sending his men to assault Wild’s strongest position, while creating a diversion against the weakest portion. He reported: “Keeping up constant skirmishing, Wickham’s detachment moved by a circuitous, wooded, and concealed route to the Eastern Side (along Kennon Creek), with orders to assault it. Dunovant was directed to make a demonstration upon the upper and opposite side, with a view to drawing the garrison in his front whilst Wickham got in.” Private Charles T. Price, 2nd Virginia Cavalry, wrote “the Yankees ran on a high pole a black flag (meaning no quarter). We had orders to kill every man in the fort if we had taken them.”

Private Paul B. Means, 5th North Carolina, wrote: “About 3 PM the signal gun fired and the 5th arose with a mighty yell for that terrible charge… We mounted the high rail fence in front and went straight and fast as obstructions would permit for that fort– yelling and firing as we went and receiving fierce front and cross-fires into our ranks from rifles and artillery in the fort and gunboats. We were within 30 feet of the fort when we saw the utter hopelessness of the attack. The line halted a moment; the order to retreat was given, and we retired under fire from the most useless and unwise attack and the most signal failure we were ever engaged in.” The Federal troops remained composed and firmly held their position as the enemy attempted to overtake the fortifications. The attack was stalled within 30 feet of the parapet, at which point Lee ordered a retreat. 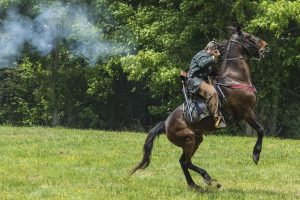 Union Lt. Simonton wrote ” Still the enemy charged with a yell, firing as they advanced: (they) seemed confident of their ability to drive (us) into the river. Then our sable warriors showed their fighting qualities. They stood their ground firmly, firing volley after volley into the ranks of the advancing foe. Artillery threw grape and canister into their ranks. The brave and determined foe rallied under the frantic efforts of their officers; again their ranks were scattered and torn by our deadly fire.” The gunboat Dawn expended 118 rounds of ammunition.  The repeated assaults by Confederate forces never successfully broke the Union Lines. General Lee finally accepted his defeat; with darkness approaching he ordered his men off the field. Around the time he withdrew, the steamer George Washington was landing with Federal reinforcements from the 10th Regiment who had been at Fort Powhatan. With his force now at about 1400-1500 men, Wild chose not to pursue the fleeing enemy. 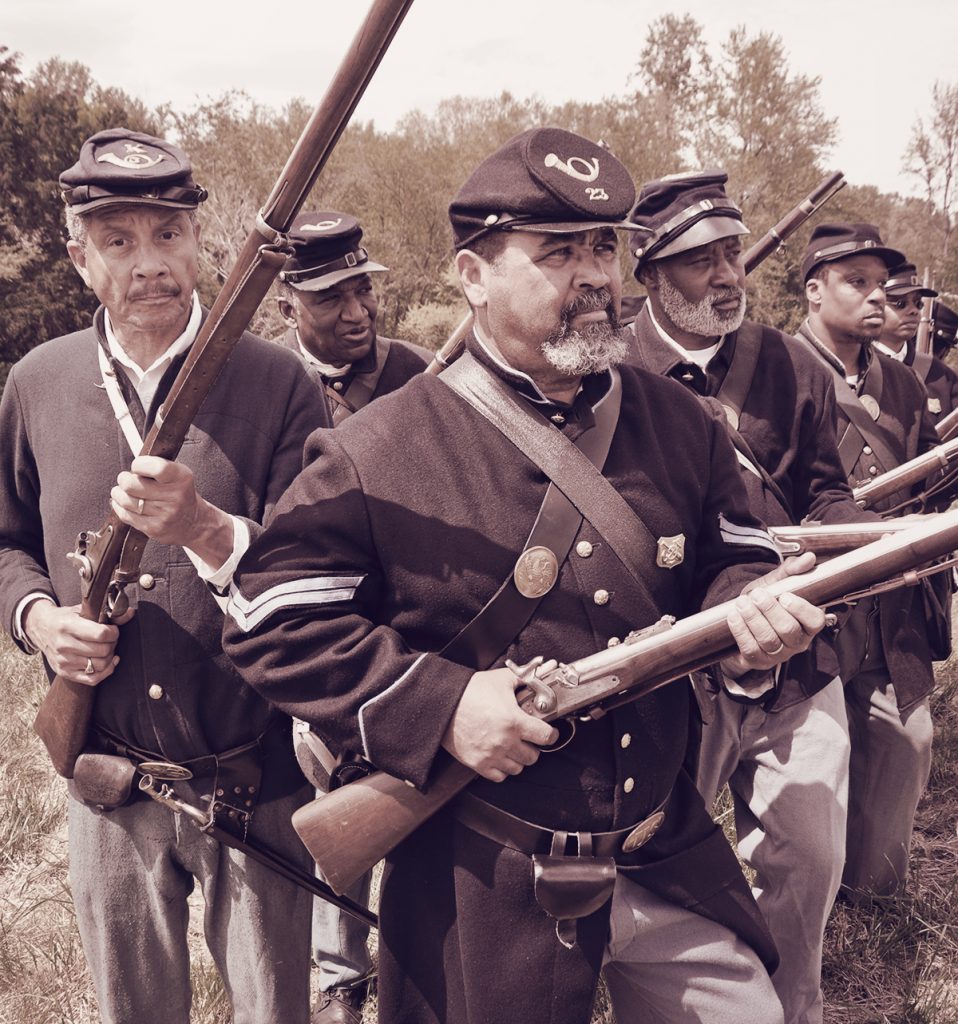 Fitzhugh Lee understated his losses as 10 killed, 48 wounded, and 4 missing: 62 total. In fact, 25 bodies were left behind in the abatis. A correspondent stated: “The (Confederates’) total loss was one hundred and fifty; nineteen prisoners were taken.” Scanty surviving Confederate records reveal 94 names (2 not confirmed), plus 8 more unnamed, total 102 Confederate casualties. In his “Report of Operation,” Lee also exaggerated Federal strength at 2,500 men in three regiments “strongly entrenched… a wide ditch across the entire front & a strong abatis being insurmountable obstacles.” The Richmond Examiner went further, “the enemy, supposedly negro troops and a large number of marines from the fleet. (The) ditch (was) 10 or 12 feet deep (and) 15-18 feet wide, an abatis made more impenetrable by intertwining wire. An officer (told us) it would have taken our men two hours to get inside their worked had there not been men inside. six gunboats.” Lt. Simonton stated: “The account in the Richmond Examiner was a gross exaggeration of the actual facts which amused us not a little at the time. No mention was made that Gen. Lee was defeated and driven back by Union forces consisting nearly all of colored troops.”